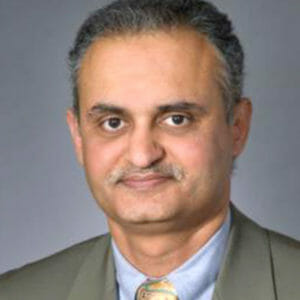 I was exposed to the medical field since I was a child. My father was a family medicine physician in rural India. He encouraged and helped me to become a doctor. I joined medical school in 1978.

In 1986, I went to the United Kingdom for further training. I completed general surgery training in various hospitals in the UK including hospitals in central England and London. My surgical training was extensive covering various fields of surgery. I had the opportunity to train in surgery as endoscopy and laparoscopic surgery were evolving in the late 80s. I passed in surgical examinations conducted by the Royal College of Surgeons of England based in London and Royal College of Surgeons in Ireland based in Dublin, Ireland. After eight years in the United Kingdom, I decided to move to the United States for higher surgical training.

In 1994, I started my fellowship training in Trauma Surgery and Critical Care at one of the busiest trauma centers, St. Louis University Hospital in St. Louis, Missouri for a period of 12 months. I was exposed to a variety of penetrating and blunt trauma patients. In the intensive care unit, I had the opportunity to train in treating all types of patients requiring critical care with a variety of complex life-threatening medical and surgical conditions.

In 1995, at the same institution, I began fellowship training in Abdominal Transplant Surgery. I obtained training in Liver, Kidney and Pancreas transplantion. I was trained in living donor and deceased donor transplantation and retrieval of living donor and deceased donor organs. I have been certified as a transplant surgeon by the United Network of Organ Sharing (UNOS). In addition, I trained in complex surgery of the Liver, Gall Bladder, and Pancreas, Surgery for Hemo and Peritoneal Dialysis, and Retroperitoneal surgery.

I completed all my surgical training in the USA from St. Louis University over a six year period in August 2000. I accepted the position of an attending physician at Sanford Health (then MeritCare Hospital) in Fargo, North Dakota from September 2000 where I continue to practice.Director, Sanford Transplant Services; Clinical Associate Professor of Surgery, University of North Dakota School of Medicine